The Sustainable Outdoor Days were part of the first MILANO MONTAGNA WEEK: an entire week of events that took over the city from the 14th till the 20th of October 2019, presented by Milano Montagna and Comune di Milano as part of the Yes Milano schedule.

This year Milano Montagna’s original four days were transformed into the Sustainable Outdoor Days that took place from the 17th till the 20th of October at BASE Milano, all rigorously free and accessible. A record turnout, with over 20.000 visitors who had their pick of over 100 guests, 25 films, 3 exhibitions, action sport… all constructed around the theme of environmental sustainability, diving life to the new name: Sustainable Outdoor Days.

A record attendance level, for what is considered to be the nucleus of Milano Montagna Week, over 20.000 visitors were able to have their pick of over 100 guests, 25 films, 3 exhibitions, plenty of action sport. In addition our editorial programme was plentiful, with 17 books presentations.

Addressing the theme of sustainability was our challenge for this edition, the outcome of which were the Sustainable Outdoor Days. The entirety of our last day, the 20th of October was dedicated to this theme, albeit there was a running thread throughout the event, something which was received incredibly well by our community.

The link between sustainability and the outdoors is inherent, and the community of mountain/outdoor enthusiasts know this all too well and took part in the series of dedicated events. The series of approaches to this topic also varied widely, from scientific lectures and professors such as Giorgio Vacchiano, Valentina Bosetti, Michele Freppaz, LTER-Italia researchers to activists and athletes such as Luca Albrisi. Moreover, the première of fromthealpstothesea by Mattia Fogliani, the presentation of Patagonia Action Works and of the project AttivAree Valli Resilienti, to name a few.
With the aim of consolidating our efforts in symbolic yet concrete gestures, we gifted each guest with a Seedball – a cluster of seeds protected by a natural bundle of nutrients and soil, idealised by Giovanni Ludovico Montagnani, founder of CrowdForest – which will all play their part in a reforestation project.
Milano Montagna as always continues to collect testimonials of great athletes from all over the world such as Piolet d’Or Krzysztof Wielicki who shared memorable moments throughout his career and the unstoppable Tom Belz who shared his titanic ascent of Mount Kilimanjaro. Also featured were the winner of the first ever WES series XC Marco Aurelio Fontana, the Freeride World Tour queen Arianna Tricomi (after her third edition with us, we consider her right at home with us), the winner of the Tor de Géants 2019 Oliviero Bosatelli, trailrunner Marco Zanchi presenting “Orobie d’un Fiato”. The list of acclaimed athletes who shared their experiences continues, with the invincible Caro North and her Arctic exploration, the extreme freerider Tof Henry and Robert Antonioli athlete of the Italian ski mountaineering team. Others guests included: Aaron Durogati, Michele Boscacci, Ettore Personnettaz, Alba De Silvestro, Shanty Cipolli, Nadir Maguet and many others, including a surprise appearance by Federica Mingolla and the great Brette Harrington! In our midst was also the starred chef Davide Oldani discussing his culinary “POP philosophy”.
Our grand closure was delivered by this year’s star alpinist Cala Cimenti who had everyone on the edge of their seats recounting his decent by skis of the Nanga Parbat summit and the first ascent (and consequent skiing decent) of the Gasherbrum VII.
The Sustainable Outdoor Days’ stage also hosted young athletes who shared their innovative endeavours, such as the adventurous Effetto Albedo initiative and the adrenaline fuelled project “Kyrgyzstan. Big wall e parapendio nel Pamir Alai”.
With great pleasure we confirmed yet another year of collaboration between Milano Montagna and Skialper, our Main Media Partner who supported the delivery of a series of thrilling tales, images and video all premiering in the exclusive biography of Tomek Mackiewicz presented by Emilio Previtali.
The action sport activities were a main attraction, all YogAscent sessions were filled to the brim, turning the Vibram Connection Lab into a sea of mats. All of the action sport activities were supervised by the dedicated students of Scuola di Scienze Motorie of Università degli Studi di Milano, who ensured that our Bouldering Area was safely enjoyed by families and children. Expert climbers also enjoyed the area and had the opportunity to participate in our first boulder contest Blocco SODo powered by Vibram, thanks to the incredible work by Manga climbing and FASI – immediately after which all participants ran into and sat on the steps of Room A to see the première of “Rotpunkt” a Patagonia Film production on Alex Megos.
We reserved a special place for our educational projects within the Sustainable Outdoors Days as well. On the 18th of October a rope climbing session was held for students of the Cavalieri, Agnesi and Arcadia institutes. The students through the film “Treeline” familiarised themselves with the theme of resilience between trees and snow sports.
Not to miss were the winners of the fourth edition of the Video Awards, where emerging videomakers (more than 500 participants from all around the globe) submitted their work based on a series of themes, the star of which was this year’s new addition “Open your eyes. Focus on climate change”.
We had something for everyone in the outdoors community at the Sustainable Outdoors Days, where those who had a passion for design (and probably sking as well) could come and see the first multisensory exhibition of Freeride Ski Museum: a journey through the history of this discipline, an exposé of over 40 skis that brought us to what we now know now as Freeride. 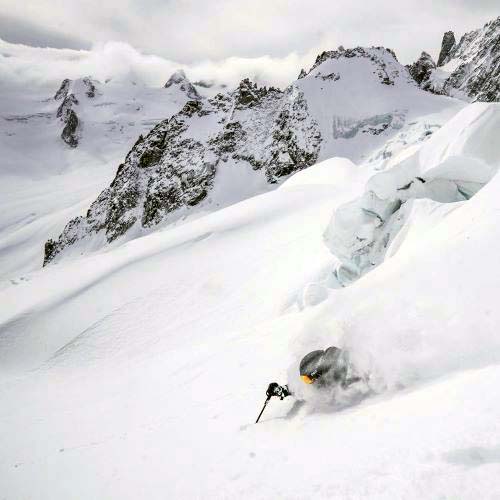 The first of our international guests is the Piolet d’Or Carrière Krzysztof Wielicki. Together with his story, the ones of the alpinist Cala Cimenti, the disabled alpinist Tom Belz, the Olympic biker Marco Aurelio Fontana, Aaron Durogati, Caro North, Michele Boscacci, Tof Henry, Ettore Personnettaz, Alba De Silvestro, Shanty Cipolli, Nadir Maguet and many others.

The Days will host many international premieres, such as The Fifty by Cody Townsend and Bjarne Salén and Rotpunkt by Patagonia, together with great retrospectives, such as Blizzard of Aahhh’s by Greg Stump and Cumbre, the masterpiece of Fulvio Mariani. Moreover, The Collective by Etienne Mérel, Treeline by Jordan Manley, Tof Henry with Born in Chamonix, From the Alps to the Sea by Mattia Fogliani, Heatseeker by Nico Vuigner and many others!

Pic from Treeline the film

We were no short of any sporting activities in this edition, as in every year. Alberto Milani delivered spectacular yoga sessions and this year’s main attractions were the climbing facilities that we had on site, both an indoor bouldering wall and an outdoor lead climbing wall. In addition, on the 18th of October we introduced a bouldering competition powered by Vibram and hosted by Manga Climbing.

Schools had a dedicated session introducing them to sporting activities, which in turn can help them lead a healthy and environmentally conscious lifestyle.

The Biblioteca Milano Montagna’s collection was once again available to the public’s leisure, allowing audiences to peruse the ever growing collection of mountain/outdoor related texts. 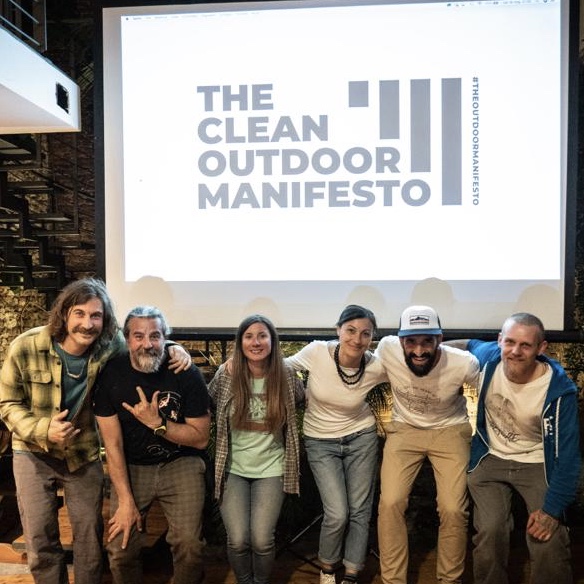 The Blue Room at BASE Milano hosted a “Green Corner” where one could have a chat with those from Patagonia Action Works, the newly launched
platform allowing people to collaborate the world of nonprofit organizations. In a living room style corner was THE CLEAN OUTDOOR MANIFESTO, a bottom up campaign born to “give an ecological awareness boost to the outdoor world”. Activists Luca Albrisi and Davide “Zeo” Branca, along with some primary signatories, introduced the manifesto to the audience. 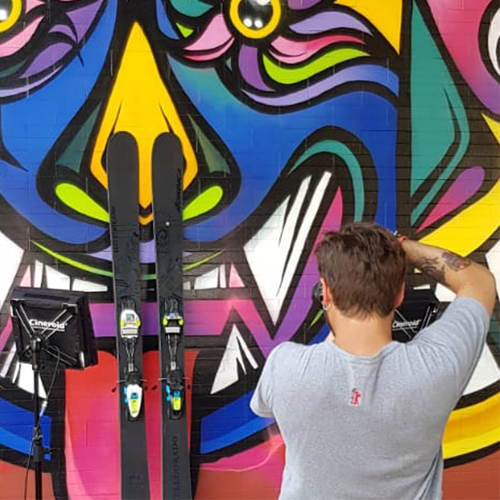 During the Days at BASE Milano the Freeride Ski Museum had its first  temporary exhibition, powered by First Track. The Museum is unique project
born to promote the spirit and technology behind freeride. The collection allowed audiences to discover 40 iconic skiis that over the last 80 years
represent milestones in the evolution of this discipline.Freeride Ski Museum
A photographic exhibition from the project Carie, which explored the controversial world of Alpi Apuane’s quarries, was placed in Room A – a project realized by Achille Mauri, Marzio Nardi and Federico Ravassard, a group of climbers, photographers and video-makers. 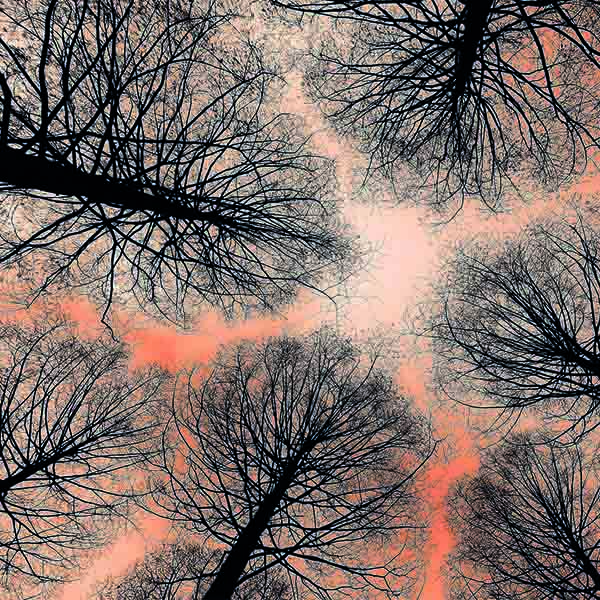 Sunday 20th of October at BASE Milano was entirely dedicated to the theme of sustainability. Featuring university professors such as Michele Freppaz and researchers from LTER-Italia, who illustrated how every citizen can take part in scientific observation utilizing “smart” tools, and featuring athletes and video-makers like Luca Albrisi, not to mention the young activists who took part in many discussions. The new collaborative platform “Patagonia Action Works” was launched by Alex Weller whom illustrated how it connects people to the world of nonprofit organizations who deal with everything from biodiversity to community, so as to turn their good intent into action.

Sustainability was not the topic just of Sunday, throughout the event it was a running theme, like the discussions held by Giorgio Vacchiano and Valentina Bosetti on the 18th of October.

More than 500 directors from all over the world joined the Video Awards fourth edition. This year, together with the categories Mountain, adventure and sport and Mountain, nature and culture, there will be a new and very special category: Open your eyes. Focus on climate change. Jury President: Guido Perrini. 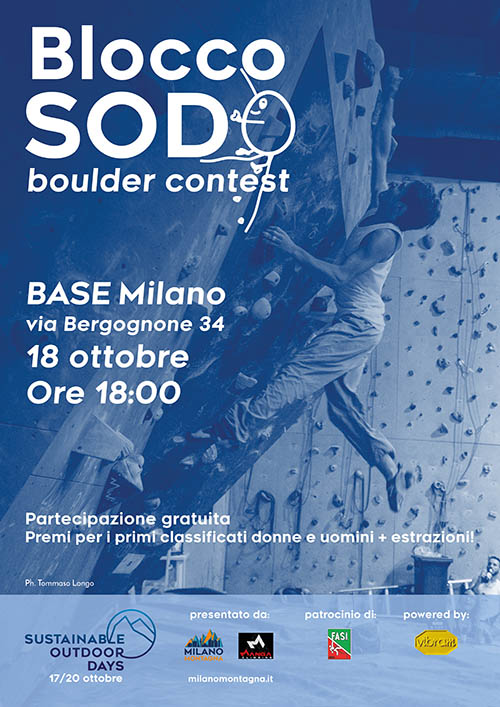 This year’s new entry was the Blocco SODo boulder contest powered by Vibram, held on the 18 th of October at BASE Milano and presented by Milano Montagna and Manga Climbing.

The contest was free admission with varied difficulties in routes, concluding with both a female and male final, contest prizes provided by Vibram.

Thanks to all those who participated! 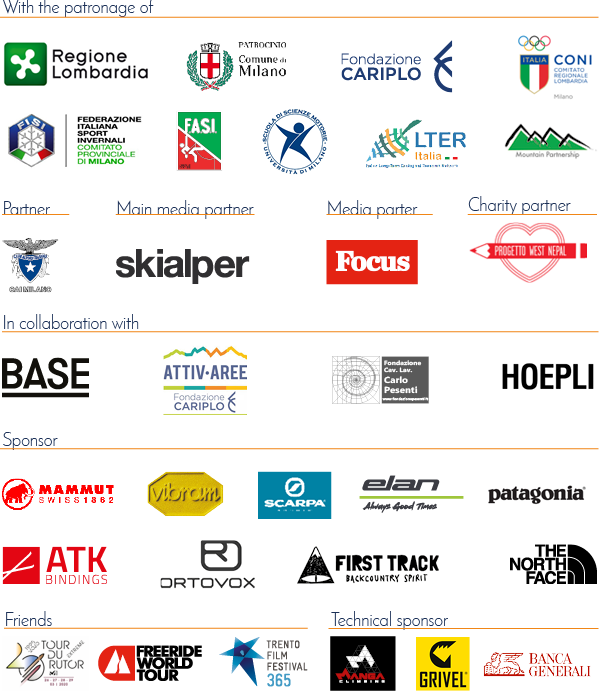